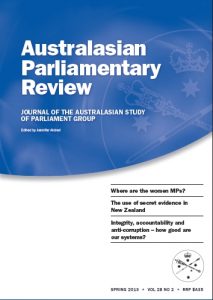 Requests for permission to reproduce material from the Australasian Parliamentary Review should be directed to the Editor.

From the editor, Jennifer Aldred

Opposition in parliamentary democracies: A framework for comparison
Bruce Stone

Closing the gap: the case for a Commonwealth Anti-Corruption and Misconduct Commission
Brian Toohey